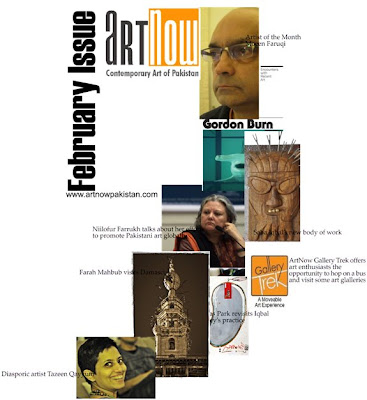 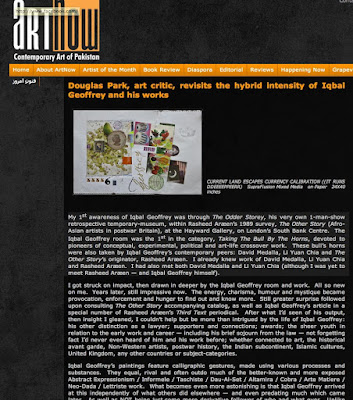 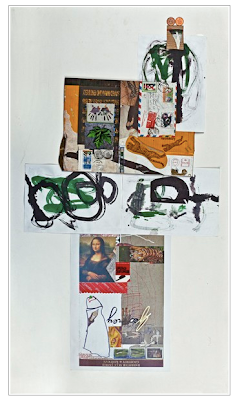 Perhaps attServings as a symptom of the linkage between Iqbal Geoffrey’s paintings and more conceptual work, was The Ashes of 28 paintings (Burnt down March 1989), in a glass phial.  A case-study specimen of Iqbal Geoffrey's practice (or “tradition”), started as early-on as the 1950's, of burning most of his finalized works when they’re new, regardless of his and any other’s belief or interest in them, whether or not they were ever exhibited or published.  Yet another groundbreaking innovation of Iqbal Geoffrey “getting-there-1st-and-doing-that-before-any-of-the-others-did”.  This time around, for whatever motives, the artist destroys their own existing productions, as art and creativity in itself, whether in a private action or public event, with or without documentation, maybe with the remains and relics deemed as art or making new work out of the leftovers.  Apparent and even partial disregard or contempt, but also enhancing any specialness, as well as being creation and newness.  Positive destruction and unwasteful disposal towards catharsis, sacrifice, riddance, changed mind, clean break, rift with the past, fresh start, moving-on.  Iqbal Geoffrey’s co-exponents include: Brandon Anschultz, John Baldessari, Marcel Broodthærs, Guglielmo Achille Cavellini, Jake & Dinos Chapman, Jan Dibbets, Nico Dockx & Jan Mast, Jean Dupuy, Tracey Emin & Sarah Lucas, Susan Hiller, Martin Kippenberger, Jiri Kolar, Michæl Landy, Bruce Mclean, Tania Mouraud, Robert Rauschenberg, Jean-Pierre Raynaud, Sarkis, Penny Slinger etc. 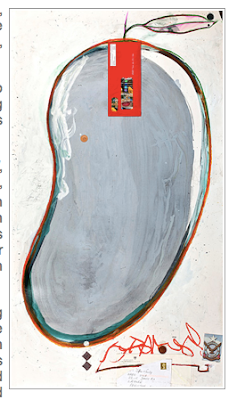 It's not only his own artworks which Iqbal Geoffrey has thus “transformed”, but also legal-tender currency as well, leading to certain American state and even national laws being changed or even introduced.
All over the Iqbal Geoffrey room were various IDEA PROCESS SYSTEMS: Art Y Facts, “Conceptual sculptural items” from throughout his career.  Some, housed in plastic leaflet holders, serving as vitrine cases.  An engraved tombstone declaring the death of art.  The Eyebrush (toothbrush, with razor-blade en lieu of bristles, improvised weaponry, used by prisoners and others), made as a personalised “gift” and “votive offering”, to a cultural “expert” (a lingual and visual play on “an eye for an eye and a tooth for a tooth”).  Sprung and set vermin-traps, baited with banknotes, each dedicated to a specific person.  A sinister and brutal market vendor’s birdcage — imprisoning a copy of Iqbal Geoffrey’s own book, Democracy in Pakistan.  A cow “piggy-bank” money-box, engraved as “The Sacred Calf”.
Amongst the Iqbal Geoffrey’s IDEA PROCESS SYSTEMS: Art Y Facts was a dispensing flask of a hybrid cross-between Trafalgar Square fountain water — and Iqbal Geoffrey’s urine — miracle formulæ solution from protest outside London’s National Gallery, after he was rejected for their “artist-in-residency” scheme in 1984 — despite his legal profession, no unfair dismissal tribunal action could be brought against the National Gallery — but media coverage and publicity ensued.
Although its more thanks to official or personal censorship than rejection, red-cards have also become red-flags, carte-blanche and go-ahead for Rasheed Aræen, Derek Boshier, Damien Bourdaud, Andre Cadere, Jake & Dinos Chapman, CRASS, Felhipe Ehrenberg, John Giorno & The Dial-A-Pœm Pœts, Douglas “Death In June” Pearce / Boyd “NON” Rice / Albin Julius “Der Blutharsch” Martinek / Ian “Fire + Ice” Read, Roland Penrose, Betty Tomkins etc.
Elsewhere, in the Hayward gallery premises, some perfume by Iqbal Geoffrey was supposedly offered for sale, as an editioned “multiple”. 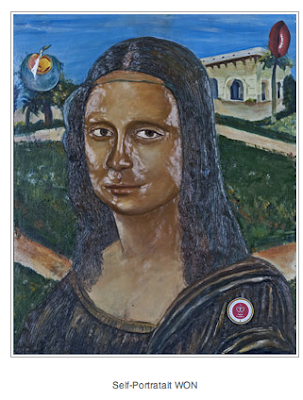 With hindsight, 1 regrettable shame was, for whatever reasons, the absence of the even earlier, shadowy and somber, but mythology and spirituality laden and symbol rich, Epitaph, 1958, not being present and correct with the other selections on display.  A compact ploughed-field terrain impasto relief.  Although painted in Montgomery (since named “Sahiwal”), the dark mandala and orb motifs ofEpitaph combine well with the fact that the name of Iqbal Geoffrey’s home-city, Chiniot, derives from Punjabi for “Behind the Moon Without Light”.  Donated by Iqbal Geoffrey’s supporter, A.S Alley to London’s Tate Gallery, as early as1962, A.S Alley having acquired the work direct from the artist’s studio in 1959.  Iqbal Geoffrey painted Epitaph during his teens, but already showing tremendous promise and advancement.  Also, fact that Epitaph is apparently1 of only 8 paintings surviving from that time, because even then the young Iqbal Geoffrey had started his practice (or “tradition”) of burning most of his finalized works when they’re new, regardless of his and any other’s belief or interest in them, whether or not they were ever exhibited or published.
Works by Iqbal Geoffrey are in many public, institutional, state and private collections, in the United Kingdom and worldwide.
At the time, another regret was the lack of still or moving image documentations of performances and other works mentioned elsewhere (in The Other Story accompanying catalog and Iqbal Geoffrey’s article for the special number of Third Text).  Same with any material for insight into Iqbal Geoffrey’s work.
However, it only takes a few examples of Iqbal Geoffrey’s prolific work and entries in his extensive “biobibliography” track-record of exhibitions, publications, awards and collections, to leave me (and doubtless others) with involuntary desire, urge and need for more; just some isn’t enough or too much.  That’s rare with any body, thing and where; not to be some instant or eventual turn-off or disappointment; instead to possess everlasting and addictive power, merit and worth.  A welcome, much-needed, enjoyable and beneficial infection and problem.

empting to describe and explain that might help me say something about Iqbal Geoffrey’s work and also much art in general.  It is because of this, that I mentioned instances and examples, citing other artists, for being to some extent similar.
Namely, “circumstances and even adversity as medium, æsthetic and context.  Not gone to waste; put to good use; all fair game; mill grist; better than nothing; the show must go on; blessings in disguise.” 1 Or, in other words: "fate striking work at any stage of production, exposure or whenever, only for drastically affected outcome to be kept by the authors, deliberately addressed and appearing as part of their output — as well as actually generating other work.  Existing, original, intentional and self-conscious meaning, expectations and plans can change beyond recognition, actually become further added to — or even lead to entirely new possibilities opening up." 2 “What I mean is, the author’s inclusion of, action upon and usage of any such developments in the same work affected, other output somehow dealing with these episodes, sometimes resulting in sidelines, career-moves and life-changes.  Also challenged, is the effectiveness of any form of liberty and control, as well as limitations and even alternative.” 3
I christened this research-project, By Accident.  Already 1 public version of a preliminary state.  Opportunities for more.  Curated by myself, with other input from Matthew Burbidge, Jean-Philippe Convert, David Evrard and David Garchey, presented by Sonia Dermience & co’s Komplot (Brussels) at Damien Airault’s Le Commissariat, Paris, 2009.
Also, my ‘Note from the Author’, ‘Foreword’ and ‘Artists and their Work’ (English / French, translated by Jean-Philippe Convert, Sonia Dermience and Constance Barrere Dangleterre), in By Accident, Komplot, Brussels / Le Commissariat, Paris, 2009, as well as my (and Jean-Philippe Convert’s) lectur-publique at the vernissage.  By Accident, got reviewed (by David Ellis), in Artforum. 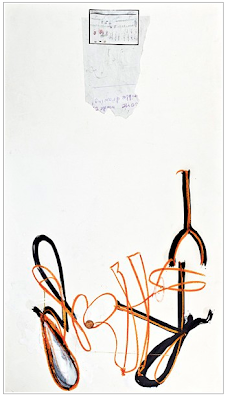